This Tiny Robot Snake is Made to Slither Through Your Brain 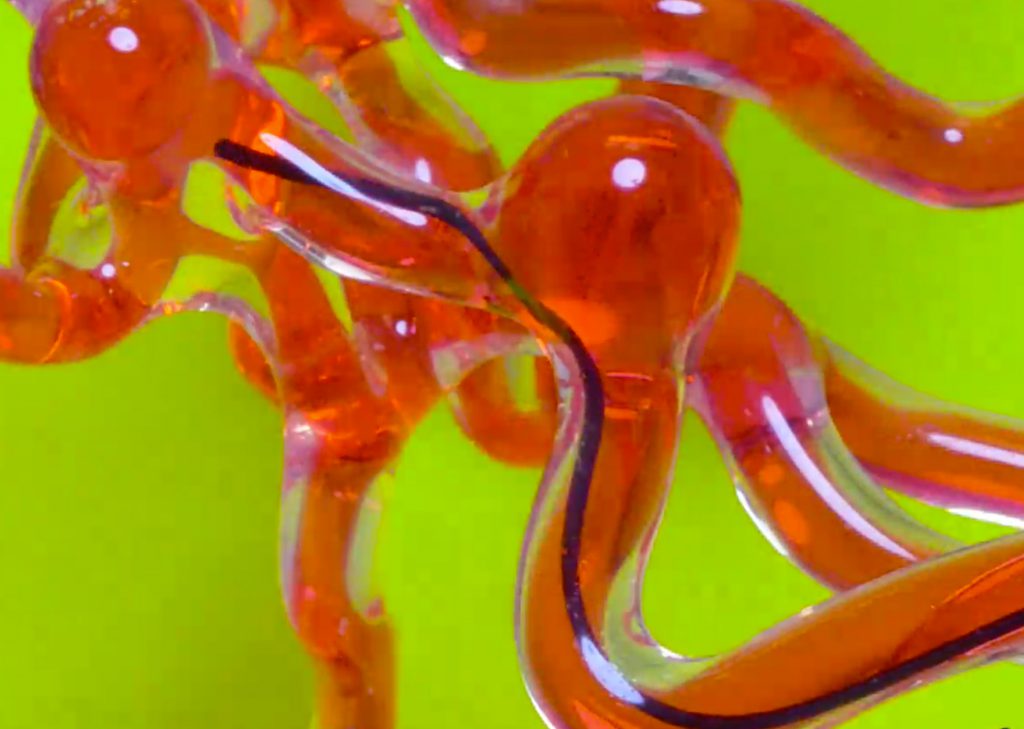 You probably didn’t picture the robots of the future to be slimy, magnetized snakes. But a hyper-flexible robot modeled after the legless reptiles and designed by researchers at MIT could make it easier to diagnose and treat blood clots, aneurysms and perform other small-scale procedures in the brain.

The device, less than a millimeter thick, was designed to crawl through the narrow, twisting veins in our brains. In a study published today in Science Robotics, researchers demonstrated that it can navigate through a model of a brain riddled with aneurysms – without getting stuck.

Snake-like robots are nothing new. But unlike others, which often operate using hydraulics, this robot uses flexible magnetic materials, called ferromagnetic domains, to move around. It doesn’t have to expand or contract to move forward, so the ribbon-like machine can nimbly navigate thin vein networks with ease.

And the whole device is slathered in a layer of hydrogel — something lead author and MIT graduate student Yoonho Kim says really did the trick. Thelubricating goo helps the robot move forward without too much friction.

“If you don’t have that lubricating layer, it gets easily stuck,” he says. Earlier robots made of rubber and other materials often had trouble pushing forward in tight spaces due to friction.

Though it has yet to be tested in humans, the robot shows promise. Not only would it be capable of performing delicate procedures, but it could also help doctors perform surgeries remotely.

Snakes in the ER

When a patient has a brain aneurysm (a weakening of the blood vessel wall) or blood clot, mere seconds can be the difference between life and death. Patients at smaller hospitals must often be transported to ones with more advanced facilities. But with a robot and an internet connection you could stay at the closest ER and still have access to a doctor that can perform brain surgery.

Kim thinks doctors could one day routinely perform surgeries remotely by navigating a small robot through the brain via x-ray visuals and a joystick. It would benefit surgeons as well — they could spend less time in the operating room, exposed to radiation.

Kim’s research team tested the prototype by guiding it remotely through a maze-like model of veins in the brain, using magnetic fields to steer. So far, the bot was successful in navigating the pathways without getting stuck, but it isn’t quite ready for the real deal.

First, the teams needs to be sure it will be biocompatible with human bodies before setting the robot loose. But since hydrogels are water-based and have previously proven to be non-toxic, Kim is confident that the bots won’t cause any damage.

If all goes well, Kim says the device could help diagnose aneurysms before they burst, and even remove blood clots by employing laser technology to help cut out blockages that may otherwise cause a stroke. And the procedure would be minimally invasive, as doctors would only need to make a small incision to insert the device.

A Mind of Its Own?

Though the robot hasn’t been tested in actual brains, Kim says animal trials should begin soon. For now, the goal will be to develop the device for use by surgeons – not to make the robots work on their own.

Kim says autonomous surgery robots, like self-driving cars, might be a possibility in the future, but aren’t really the goal right now. And in a surgical setting, letting humans take the wheel might be a better idea than letting a robot think for itself.

“The surgeons need to actually hold the key, otherwise if something happens, there is a liability,” Kim says.

So while these robots could one day crawl around inside your brain, they likely won’t have a mind of their own.

Retrieved from Discover on August. 22, 2019. Jennifer Walter. "This Tiny Snake is Made to Slither Through Your Brain"